The Ascension of Tom Oben: A Twenty-Year Trajectory of Success 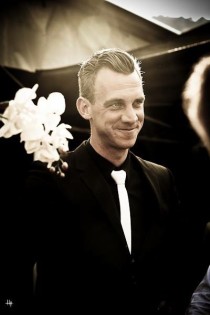 When Tom Oben exhibits a world class Arabian horse, it is easy to understand why he is among the top trainer/handlers in the breed. His tall, handsome frame exudes an aura of casual elegance in a Fred Astaire kind of way; his warm smile and ready wit make him a great favorite among his peers. His basic nature is upbeat and friendly while at the same time, Tom is a prankster who loves a good joke! He is genuinely interested in the people in his life and is respected for his impeccable work ethic, which has led to phenomenal results in show rings all around the world. Tom has earned a sterling reputation as a man of integrity and class in a challenging, competitive, globalized business. Now, twenty years after his earliest appearance in the show ring with a homebred filly in 1996, Tom is showing great horses to the world’s most coveted titles for its most prominent owners and breeders. Tom Oben’s steep trajectory of success has become an ascension into the upper echelon of the Arabian breed.

The Arabian horse has been in Tom’s blood since long before he was even born. He and his brother have spent their entire lives living alongside the Arabian horse, being born to parents that are well known figures on the European show circuit who still breed and own Arabians these many years later. In fact, his dad Gerard still frequently serves as ring steward at major horse shows. Tom followed in his parents’ footsteps as he began to exhibit horses for his family. Following those earliest of beginnings, Tom credits much of his success to the many professionals who have helped him along the way. Wendy Jane Delvalle of Forelocks Arabians played a significant role throughout Tom’s formative years as he began to show and win with her horses. “We were Tom’s first client,” Wendy recalled. “As a young, ‘rising star’, we already had faith in his ability to train and show horses. Many successes were achieved by our horses with Tom on the lead. We are very proud of the way Tom continues working on his own abilities, getting better and better while becoming a top trainer. Getting to be so far the best, he achieved Trainer of the Year! We hope to be part of the Obi successes for a long time. Not only with our own horses to be trained and shown, but also supporting Tom in any challenge he faces. We’ll be cheering for him at every show!!”

Tom continued developing his skills under the guidance of top breeder James Swaenepoel at Swatam Arabians in Belgium. James has nothing but admiration for Tom. “Tom Oben, what a success story!” he exclaimed. “It was clear when Tom made the serious decision to leave school and focus on the horse business that it was a ‘must succeed’ situation. His parents kept a watchful eye and it all went very well. He was eager to learn, and talented. Tom is now working independently at one of the most beautiful facilities Europe has to offer. I used to call him Obi, which is why he used that for his stable name! I am glad that we support Tom and ALL young trainers that started out with us, because we all have the same passion. I hope now my son Jesse can learn from these guys and create his own legacy…” At 18, Tom became a full-time trainer and groom for Johanna Ullström and Philippe Hosay at their European Training Center. Learning his trade under the guidance of well-respected professionals allowed him the chance to work with some of the finest horses in world, and to interact with the hierarchy of the Arabian industry. This exposure opened doors for Tom to be able to continue to learn under more of the breed’s most successful trainers, including a stint with David Boggs at Midwest Training Centre.

Tom also credits Michael Byatt and Rebecca Wenden, now the manager of Al Hawajer Stud, with being longtime mentors and supporters. Rebecca was happy to comment on her impression of Tom. “Obi and Al Hawajer Stud are heading into our sixth season working together,” she said. “We are very proud of our combined growth over the years. I saw the potential in this young trainer when he first worked with our horses and admired his honesty, integrity, and work ethic from day one; he just seemed to fit like a glove. One of the things I admire about Obi is his never say die attitude. There have been a couple of times in very tough competition where I have doubted whether we could get the championship, but Obi goes for the win, putting in 100% effort while managing to have the horses stay relaxed and calm. His successes are well earned, and we look forward to many more ribbons with Obi at the lead.” Rebecca’s opinion is typical of the high regard that Tom Oben has earned throughout his career. Longtime friend and colleague Sandro Pinha is grateful that their paths crossed. “I had the pleasure of meeting Tom over fifteen years ago,” he recalled. “He quickly became one of my best friends in the world. He is the kindest and most honest person one could ever get to know, and for sure one of the most talented horsemen I have ever met. Tom is great. He is the best.”

Tom Oben took what he had learned and began to further develop his reputation as a winning trainer. Once he hit the Middle Eastern show circuit, his stairway to the top began to rapidly ascend. It did not take long for Tom to achieve success at the international level. As his stable of owners began to grow, he set his sights on establishing a training center of his own. Today, Obi Training Center is a thriving enterprise, housed on the lovely grounds of Dion Arabians in Langemark, Belgium. It is a full service facility for training, boarding, breeding, and stallion management, boasting 22 grass paddocks and 69 stalls. A therapeutic, vibrating, Vitafloor platform and five work arenas support the thriving training program, while the breeding facility includes a state of the art lab to accommodate the shipment of fresh and frozen semen. The horses have access to acres of grass, making for a bucolic image with mares grazing and foals frolicking.

One thing that sets Tom apart from other trainers is his very strong base of loyal supporters. He has a great team of friends and associates both inside and outside of the horse business who support him in his efforts, both in paid and volunteer roles. At Obi Training Center, they have concocted a formula for success that works for all horses, whether they come from large, powerful programs or small, private farms – all of which are equally supported by and mutually supportive of each other. Tom has a gift for establishing strong, positive relationships with his clients that includes them as part of the team, which is a key element to his continued success. There is a generally optimistic feeling around the Obi stalls, perhaps kept buoyant by a continual supply of new championship garlands and trophies! Tom’s style creates a nurturing environment that has produced many happy results over the years, including Tom’s first World Gold Championship in 2015.

The success of the collaboration of Tom Oben and Al Thumama Stud was spotlighted when Tom and the incredible Morion added the 2015 World Gold Champion Junior Stallion title to his already impressive list of wins. Tom and Al Thumama manager Hilke De Bruycker were beyond delighted to secure the Gold for owner Dana Al-Meslemani of Qatar after earlier recommending that she lease Morion from his breeder, Michalow State Stud. Dana is a very knowledgeable and participatory owner who surrounds herself with the highest quality, be it horses or people. “Al Thumama Stud would not be where it is today without Tom Oben,” Dana stated. “I wholeheartedly appreciate his belief in us and I hope we continue this fruitful relationship alongside one another for many, many years to come! I greatly admire Tom’s horsemanship in the show ring, but what I truly appreciate is that he takes his time to get to know all of the horses in his care and tries his very best to make sure that not only are they disciplined, but they are happy as well. Horses are passionate creatures and must be approached with similar passion– and Tom definitely keeps spirits high for all of us, horses and humans alike.” Hilke De Bruycker holds Tom in the highest regard. “Honesty, loyalty, dignity, and friendship are the words that come to mind when I think of Tom Oben,” she stated. “Our friendship goes way back before my managing position at Al Thumama Stud and our professional relationship is completely based on that friendship. I have always known Obi to be honest, loyal, and dedicated – all qualities that are reflected in his work. They are the elements that fuel his success. This is what makes Obi Training Center different. The story there has just begun.”

Due to his background, Tom holds an enduring love for the show circuit and a healthy appreciation for the work that the organizers do in planning and conducting each event. Obi Training Center exhibits horses at both small and large shows throughout Europe and the Middle East. Attending so many shows each year allows Tom the flexibility to be at the end of the lead for more owners, spreading the success. Thus far in 2016, Obi horses have brought home a bounty of gold, silver, and bronze medals, and scores of elegant garlands, ribbons, and trophies for a diverse group of clients that range from ruling families with large herds to single horse owners. In a strong endorsement by the general public, Tom was voted Trainer of the Year at the All Nations Cup in Aachen, a tremendous honor.

In following his path to success, Tom Oben has maintained his honor and integrity, a fact that is not lost on the Arabian community. He is universally well liked and well respected for both his character and his talent. He has a barn full of satisfied horses and satisfied customers. And as he continues to build on his years of experience, it is easy to imagine that many other tributes and victories will be celebrated by Tom Oben and Obi Training Center in the future. 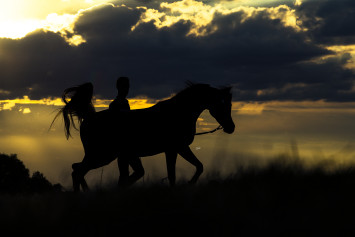